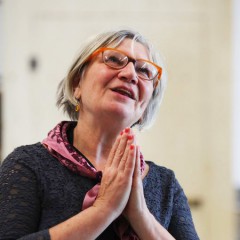 Janice Connolly, Artistic Director
Janice is a founder member of the company and has been the Artistic Director for the past 15 years. She has written, directed and performed in many projects for the company. Janice is a trained teacher and workshop leader and currently leads many of our Comedy Courses and Probation Sessions as well as worker as a mentor of excluded young people with Barnardo’s.
She is also a successful performer in her own right and has featured in series such as Peter Kay’s Phoenix Nights (Channel 4) on Channel 4, Dead Man Weds (ITV) and Thin Ice (BBC2) as well as appearing twice in Coronation Street. Her recent theatre roles include include White Open Spaces (Pentabus), A Taste of Honey (New Vic Theatre, Stoke) and Tartuffe (The Rep, Birmingham).
Her alter-ego , Mrs. Barbara Nice is a well loved comedy circuit headliner as well as a little bit of a Birmingham Icon. To find out about upcoming gigs have a look at her website or twitter